skip to main | skip to sidebar

Well its official. I've been sucked into the Facebook vortex. My company, Local Matters just finished and released our first Facebook application, called 'Go Where?'. The app was developed by myself and a few others (including Jay over at Bar Diver) at Local Matters. The idea was conceived by our Marketing director, one of the founders of The Onion. Go Where? essentially revolves around sending people to places from fictional spots like 'An Elderly Singles Cruise' to actual addresses that are shown as maps on your friend's profile.

It should be interesting to see where this goes; we've put a lot of effort into it and I think its a great looking and functional application. Keep an eye out for future updates, its exciting to be involved in the Facebook revolution!

Mashable has an article up about the app and our CEO Perry Evans has some things to say about it in his blog. 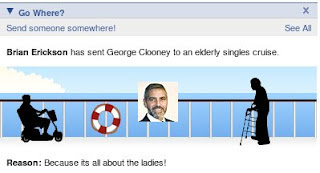 There have also been a couple of Facebook articles out today; one in Business Week on the creators of 'Sticky Notes', Tech Stars graduates J-Squared Media. O'Reilly also released a report about the 'long-tail marketplace' that is the Facebook application sphere.
Posted by Brian Erickson at 6:43 PM

Brian Erickson
Denver, Colorado, United States
These are a collection of my observations as a software engineer and MBA student as well as thoughts on music, motorcycles and my other random pursuits.